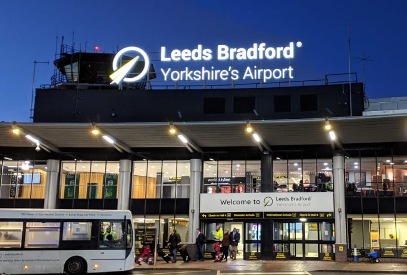 The West Yorkshire Combined Authority (WYCA) is seeking the public’s view on plans to build a new railway station to link Leeds Bradford Airport. The new ‘Parkway’ station will be a 5 minute bus ride from the airport and link to the existing line between Harrogate and Horsforth and the Bramhope tunnel (southern end).

Those involved in the project say the new station will provide a vital link to a new proposed North West Leeds Employment Hub, an 80-acre site which could create 5,500 new jobs. The plans also aim to encourage sustainable travel with less people taking their cars to the airport and surrounding areas, helping to ease congestion and improve air quality in the area.

The development would have two 125 metre platforms, a staffed station building, shops and waiting area as well as a bus interchange for transferring to Leeds Bradford Airport and a 350-space car park. The project is expected to cost £42m.

With two trains an hour stopping at the station, possibly rising to four trains an hour in the future, travel into Leeds or Harrogate will be more accessible for local residents. To express your view on the plans contact the WYCA.